FIRE BELOW ( A WAR OF WORDS)
Playwright Owen McCafferty offers up a play about the middles classes at The Abbey theatre. Written as a companion piece to his 2012 play Quietly, it explores religion, marriage and the often odd relationship between neighbours.
A Catholic couple, Rosemary (Cara Kelly) and Gerry (Frankie McCafferty), are listening to opera on their deck on a hot July evening, waiting to watch the bonfires.
Their Protestant neighbours Tom (Ruairi Conaghan) and Maggie (Ali White) join them and sparks fly.
“We’re not real Protestant and Catholics, are we? We’re way beyond that,” Gerry remarks.
Tom’s learning Irish and he and Rosemary banter as Gaeilge to the irritation of the others.
The lives of these educated Belfast citizens were hijacked by the Troubles. If only the middle classes had been listened to rather than “held to ransom by the working classes,” as is stated in the play.
The play runs until November 18th at the Abbey Theatre. Tickets €25 here.
NATIONAL CIRCUS FESTIVAL OF IRELAND – A Review 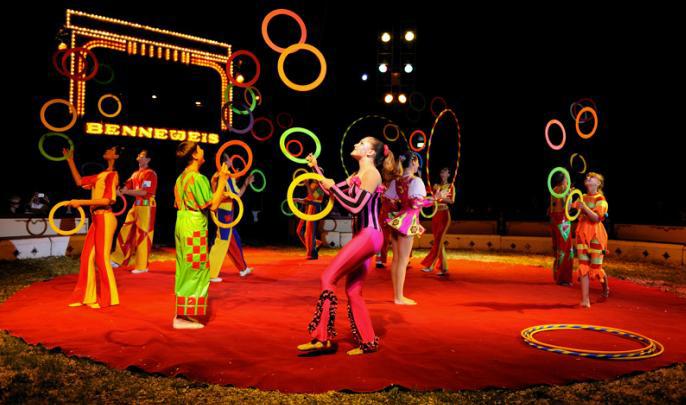 The 16th annual National Circus Festival of Ireland ran in Tralee from Thursday 9th until Sunday 12th November. If you missed it this year – make sure to mark your calendar for next year.
The festival is a delight and joy for audiences of all ages.
Circus performance is undergoing a revolution in Ireland and this festival is at the heart of it with eye-popping shows and incredible feats of skill and beauty.
With plenty of free outdoor entertainment over the weekend – including a parade through the streets of Tralee, a free comedy circus show, a specially commissioned Juggling Machine Cycle-Installation – it was phenomenal.
You could even learn to tight-wire walk for free in the park!
Both myself and the kids loved the spectacular showmanship, so don’t miss it next year. Take a weekend trip down to Kerry and enjoy!
Details will be on circusfestival.ie.
Filed Under: Weekend Warrior
WEEKEND WARRIOR: Part 3
WEEKEND WARRIOR: PART 5