What’s worth watching this weekend, you ask?

THE MAN WHO INVENTED CHRISTMAS

Out today (Dec 1st), this biopic drama tells the story of how  iconic author Charles Dickens  came to write the seminal yuletide novella ‘A Christmas Carol’ (1843) in only six weeks.
Set in 1840s London, Dickens had been struggling to come up with fresh ideas after a string of failed works. However, when he’s inspired by the vision of a story that would fire the hearts of humanity, he set out to write and self-publish a book that would reignite his career – and maybe himself, personally.
As the likes of Ebenezer Scrooge (played by Academy Award-winner Christopher Plummer) and The Ghosts of Christmases Past, Present and Future start coming to life, Dickens began creating a masterpiece that gave birth to the Christmas we know and love today.
Lots of beautiful Georgian Dublin is featured and our own David McSavage.
Directed by Bharat Nalluri and with a screenplay by Susan Coyne, this lovely film is already garnering great reviews – in fact, everyone in The Lighthouse Cinema for the press screening had nothing but good things to say!

THE X FACTOR FINAL
Now in its 14th year, the latest season of The X Factor will wrap this weekend, with its 2-part finale starting this Saturday (Dec 2nd) on ITV and TV3 at 7.05pm
Three acts will go head-to-head – Rak-Su, Grace Davies and Kevin Davy White- the act with the lowest audience vote getting sent home and the final two competing in the Sunday night final.
I LOVE Myles from RakSu!! No, the band name is not from Chinese takeaway menu – it’s from Tracks Vs Suits. Word on the street is that this foursome are the public favorite, but we’ll have to see!
Of course, it’s not just the contestants competing, but the judges as well! Except our own Louis Walsh, who unfortunately has no acts left at this stage.
And I must say that I adore the outfits Nicole and Sharon have been wearing this season. Different styles, but equally fab!

Note: If you’re going to miss the show, catch up on TV3 Player!

If you’re staying in tonight for the most traditional piece of TV in Ireland – The Late Late Toy Show – on RTÉ One and RTE Player at 9.35pm (Dec 1st), make sure to pop into Penneys and get your official Toy Show pajamas!

We wore them rather well, no? 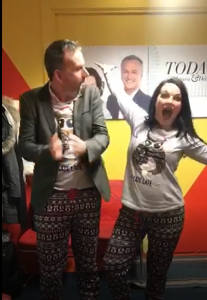 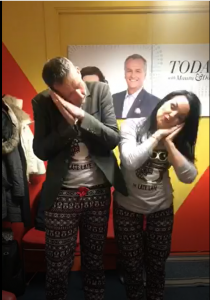