My whole life can be summed up in one sentence…

If you tuned in to Wednesday night’s episode of Celebrity Opertion Transformation on RTE, you’ll know that I was the ONLY one to gain weight after our second week.

I’m actually heavier now then when they weighed me over a month ago when I was 12 st 6lbs at our initial assesment.

Then we had two weeks before we started the plan and I ate all round me, bringing me up to 12st 9.5lbs which I then lost in the first week.

So I’m 12st 6.5lbs now and I wouldn’t mind but I was an actual angel at New York Fashion Week!

I had imagined that there would be nothing so torturous as being surrounded by sweets, treats and good-time goers, when you’re trying to abstain yourself.

But surprising even myself, it wasn’t as big a challenge as I’d assumed.

I set off to the airport after my a brekkie before-hand of two boiled eggs and toast.

I don’t know how I haven’t turned into a hen at this stage as this is what I have every morning.

I rocked up to the The 51st and Green preclearance lounge at Dublin Airport which is like a food festival with bags of crisps -mmm- in baskets everywhere, pancakes and muffins and cake and biscuits and lets not forget the bar and the barista serving my beloved cappuccinos.

But no, I was like a supermodel before a shoot and only ate a bit of smoked salmon and beetroot quinoa.

That quinoa though I find, always gets stuck in my teeth, but better than the crisps, that get stuck to my arse if you know what I mean!

Then it was onto the flight where I was flying Business, so I was offered a glass of champers almost immediately.

I took one sip from the lovely, long-stemmed glass and much as it pained me, put it down, pulling out my laptop instead and getting stuck into work.

Arriving in NYC, I checked into The Standard High Line hotel, my home for the next four days and surprised myself again by going for a walk and a workout on the High Line. 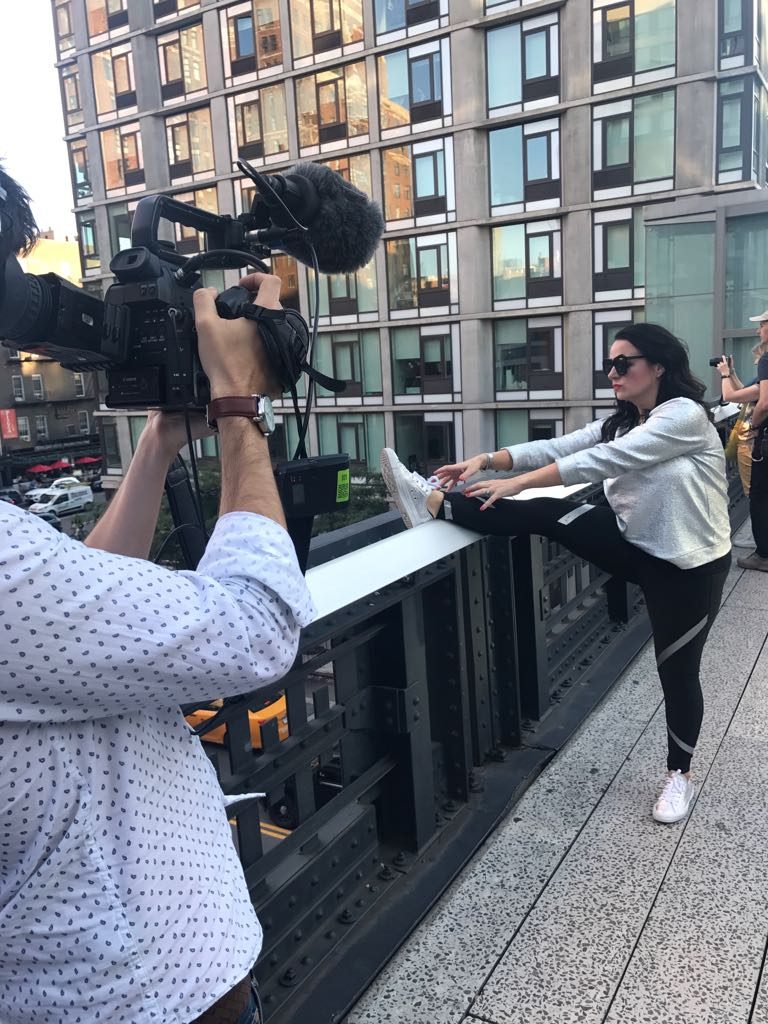 People around me were craning their necks to get a look, upon seeing the camera following me, assuming a major celebrity sighting.

Celeb sighting fail as all they got to see was me and my nonsense.

I actually had peeps in stitches with my carry on.

Let’s just say my ‘freestylin’ exercise routine will never make it onto a DVD in time for Christmas.

Then it was up to rooftop bar to meet friends.

I ordered a large bottle of San Pellegrino sparkling water, sipping it with a big smug puss on me as I nibbled on a green bean salad.

Next morning bright and early, I headed to the Grand Central Oyster Bar for Kate Spade’s 25th anniversary show bumping into DebbieO’Donnell from TV3’s Xpose as well as actress Elisabeth Moss and singer Betty Who.

Afterwards they served the most delish oysters so I shucked away and shooed away the accompanying champagne.

Bibhu Mohapatra was the next show where I got to sit on the frow with Miss Universe Iris Mittenaere and Miss World USA Kara McCullogh.

Dear Lord, If you cant make me skinny at least make my friends fat, I thought to myself!

But I was on a roll, backstage before the show where I watched in wonder as Maybelline Global Make Up Artist Erin Parson worked her magic on the models, I kept away from all the treats.

Normally I’d be tucking in to the treats but something in me has switched and I’m looking for the healthy alternatives now.

I filmed a few interviews with different websites and then, instead of heading out on the town I wrote up all the shows for my website and updated my Instagram.

Very different to the previous twenty years I’ve been going to of NYFW!

Early Saturday morning I took a stroll around Chelsea Market after popping into Soul Cycle where all the celebs work out. 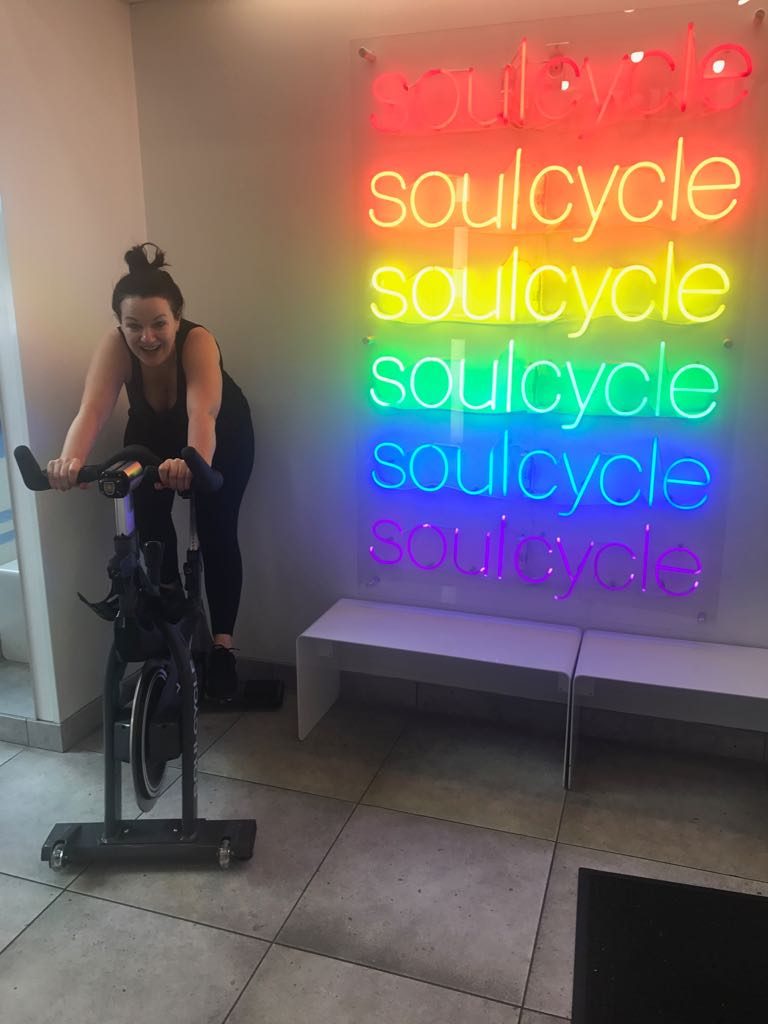 I’d highly recommend it btw- not for the faint-hearted, but it’s fun!- and found a wonderful little breakfast/brunch bar Chalait.

My heart normally says croissants, cappucinios and chocolate for breakfast, but my jeans were screaming, will you eat something healthy for God’s sake!

So I tentatively ordered a matcha bowl, but lo and behold, it was delicious!

Then there was the Tibi show and Dion Lee show before meeting up with actor Gabriel Byrne.

Such a gentleman and always so generous with his time.

Even when we were papped!

Anyhoo, he gave me lots of great advice on portion sizes and how easily we can all slip up with mindlessly eating which he said happens a lot on set.

Or rather I was.

I see food and I eat it.

The Brandon Maxwell show followed full of Supermodles like Gigi and Bella, Joan Smalls, Kalie Kloss and Jourdan Dunn and then I was off to the Maybelline Mansion for THE party of NYFW.

Drinks flowed and nibbles circled like crazy, but I dodged the gilded trays and enjoyed the evening with quiet determination . I was too busy getting selfies with Winnie Harlow and dancing with Madison Beer.

Sunday morning at The Butcher’s Daughter for brekkie followed by window shopping boutiques and gorgeous little shops dotted around the surrounding blocks got my legs working for a good hour.

I had walked so far I almost didn’t make it back the hotel in time to get glammed up for Public School’s fashion show.

Running late is my cardio!

Next I headed to The Ludlow Hotel to interview model Adriana Lima.

I couldn’t believe how small her waist was.

And she’s had two children!

We had a lovely chat before I had to rush into a taxi and head to the airport.

I checked into the British Airways lounge upon arrival and loaded a plate with fruit and vegetables which kept me sated for hours so I didn’t have to eat on the flight back.

I tried to get some beauty sleep in, as I was heading straight to the weigh in from the airport .

I knew I was bloated and retaining water as my rings were tight and my ankles were swollen having flown through the night and not sleeping, so I wasn’t actually that surprised that I’d gone up.

I didn’t wear any Spanx either-deciding to thow them at Karl instead!

Diet Tip-your pants wont get tight if you’re not wearing any!

Overall, I was actually quiet pleased with myself .

There were no snaccidents, you now where you niible on somehing by mistake and I managed to fit exercise in around my work schedule.

To paraphrase a common saying about NYC, “if you can make (a diet work) there, you can make it (work) anywhere!”