Trying new treatments is part of my job as a beauty writer.

Look, somebody has to do it!

I’m totally winking at you now as I type that!

Although, the whole ‘’no pain, no gain’’ isn’t really my thang as I have the lowest pain threshold EVER.

Like, I’m the person who wants an anaesthetic when I get my teeth cleaned!

Anyhoo, I stated hearing all these marvellous reports about this RejuvaPen treatment that was similar to micro needling which I tried once for about 3 minutes and fled!

The treatment is a big hit with celebs like Jennifer Aniston and Gwyneth Paltrow, so I headed along to The Marker Hotel where their spa offers the treatment with the use of a specialised ‘pen’ called RejuvaPen. 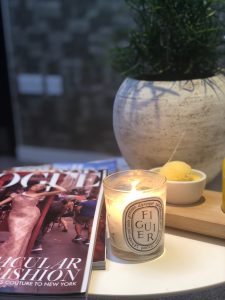 So what is it?

Clara Jordan, Spa Director, told me that the treatment is, ‘’Micro-needling, and this causes very small trauma to the skin which results in a lot of collagen and elastin production.’’

That’s the bit I liked the sound of, not the needle bit!

At the Marker, I was in the safe hands of Carla, who was a delight and happily answered all of my questions. 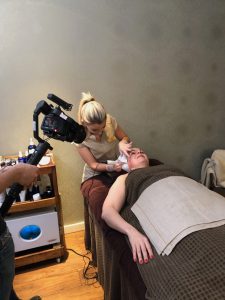 RejuaPen is a  non-surgical treatment that causes skin to stimulate collagen production and fresh, new tissue.

Pores become finer and the overall health and circulation of the skin is improved.

One thing to note though, Carla did say if you’re pregnant this treatment is a no-no.

First things first, a numbing cream is applied and is left on for about 20 minutes.

After it seeps into the skin, it’s time for the needles.

Yes, a bunch of ‘em continuously punctured my face…and I didn’t feel anything!

Anyone who has a low pain threshold, don’t worry!

RejuvaPen isn’t just for the face – it can be used on other body parts for rejuvenation.

I got my hands done as well.

Most people feel their hands are one of the biggest giveaway of age. 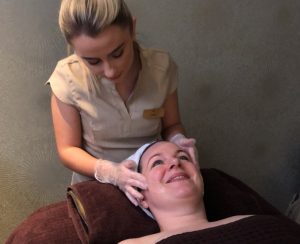 The location of The Marker Hotel sees many businesswomen dropping by for the treatment during lunch or after work.

However, Carla told me that you can’t have alcohol for 24 hours so don’t get it done before a big night out or an event that you plan on drinking at.

The gym isn’t recommended for 24 hours either as excess sweating is a non-no – I might just take a few years off to be safe!

Straightaway after the treatment was done I could see a difference already.

It wasn’t painful at all, which I was surprised about.

It was quite relaxing – I was half falling asleep while it was being done! 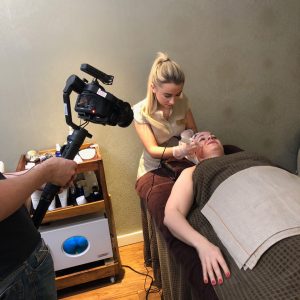 I’ve never had my lips done but it’s really plumped them up and it’s also plumped out my cheeks – all without me having anything invasive done.

So post-treatment what did I have to do?

I was given a homecare kit that comes with cleanser to cleanse with and then the copper repair serum to repair the skin afterward. 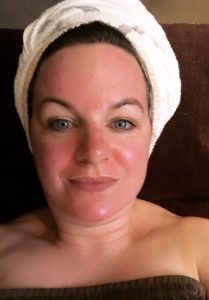 Also, if you want to wear make–up the next day, make sure it’s mineral based.

I didn’t mind that because that means that it actually did something to my skin!

I’ve had treatments before and nothing has happened so this is a good thing.

So, did I notice any results?

My skin is definitely  smoother in texture, my lines more diminished, while a scar I’ve had since I was a child isn’t as deep as it was,  and my make-up goes on better.

Clara recommends between 4 – 6 treatments to get the best results.

But for me, it’s a massive thumbs up for RevuaPen.

For further information on Rejuvapen or to schedule your complimentary private consultation, please phone our Spa team on 01-6875194 or email spa@themarker.ie